For many different needs!

Populett in the Nuuksio national park

Principles of sustainable nature tourism are applied in the destinations managed by the Board of Forestry. Each year about 180,000 hikers visit the Nuuksio national park, which is one of the parks managed by the organisation. The area is appointed with a variety of services. The number of toilets in the national park amounts to about 30. Each camping site, campfire area, cooking shelter and lean-to is furnished with a dry toilet. In addition, there are dry toilets next to the nature hut by Haukkalampi pond and at Kattila.

Two of the dry toilets are 300-litre Biolan Populetts, and one is a 200-litre Populett. The large Populett dry toilets were brought into use in Nuuksio in 2008, while they were still in the product development stage. They weren’t introduced on the consumer market until later. 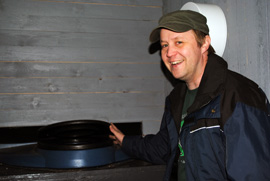 According to the ranger of the Nuuksio national park, Mr. Antti Raita, the Populett has also attracted growing interest from other national parks. 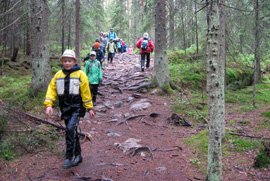 The toilets in the Nuuksio national park are frequently used. 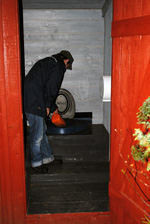 "The Populett toilets are operating excellently"

According to Mr. Antti Raita, ranger of the Nuuksio national park, the Populett dry toilets have met all expectations invested in them.
- They operate extremely well and reliably and are easy to maintain. In addition, they are convenient to use, says Mr. Raita.
- All one has to do is add some bulking material, advises Mr. Raita.

The two 300-litre Populett toilets of the Nuuksio national park are placed side by side in the toilet building located on a gentle slope.
- The toilets and the toilet building look as if they have “turned their back” to approaching people. According to Mr. Raita, the slight height difference is an advantage, as it means the liquid flows more rapidly past the compost mass into the closed tank next to the building.
The waste container is easy to empty through the hatch in the rear wall of the wooden toilet building. The waste is taken for post-composting to the large composting tank built in the area, which consists of three compartments In two years the Populett toilets have been emptied five times and the closed tank only once, because most of the liquid is evaporated during the composting process. 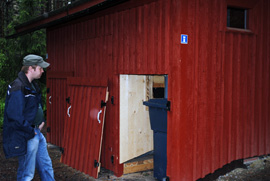 Maintenance work on the Populett toilet is easy through the rear hatch. 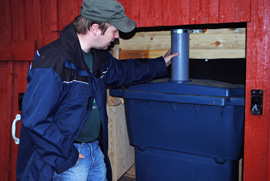 Odours are eliminated by means of efficient ventilation.

The Populett is favoured by hikers

The Populett toilet is highly rated by the guide of the Nuuksio national park and the hiking group.
- Myself, I use these toilets the most and I have noticed that they are also favoured by hiker groups. These toilets are always tidy, irrespective of the season, says Ms. Katja Kotkas, who represents Green Window Oy, a company operating in Nuuksio.

- Funny, I haven’t even thought about it. I think that this must mean that odour is not a concern in the Populett toilets!
The locks of the national park’s toilets are fitted with counters. These are used to track how frequently the toilets are being used. The counting is still in progress. 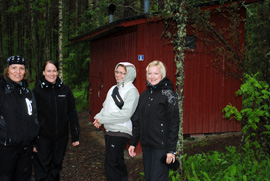 The guide of the nature tours Ms. Katja Kotkas (on the left) and female hikers give the Populett toilets full marks for tidiness and functionality. 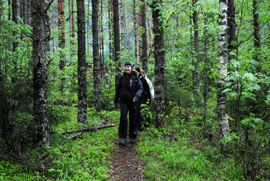 The guide of the nature tours, Ms. Katja Kotkas, says that she always advises hikers to use the Populett toilets, whenever possible. 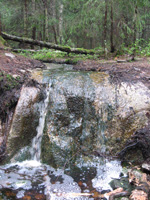 Valuable nutrients of the waste from the dry toilets are returned to natural circulation by composting. The urine and the seep liquid are excellent nitrogen fertilisers for the garden. Seep liquid can also be used as compost starter. Unfiltered liquids load the soil and may leach into nearby bodies of water, ground water or wells. Along with phosphorus, nitrogen eutrifies the bodies of water.
The purity of nature is fostered in the Nuuksio national park. This means, for example, that toilet waste is carefully collected.

Adjusting the air valve in the seat top

Ventilation of the Populett Toilet is controlled using the replacement air valve in the seat top. During summer the valve is kept open which makes the ventilation more effective and the evaporation of liquids more efficient. During winter the air valve is kept almost closed, which reduces temperature loss from the composting mass. Keep the thermal seat lid closed, when the toilet is not in use, to ensure correct operation of the ventilation.

What can be placed in the Populett toilet?

The Populett is intended for composting toilet waste. Do not put into the unit anything that hampers the composting process or does not compost, such as:

Using bulking material and the Compostmixer

Year-round use of the toilet

The toilet waste freezes in frost. Freezing damages neither the unit nor the compost mass. Decomposing of the compost mass will continue when the air temperature rises. The capacity of the toilet can be increased by utilizing the urine-separating functionality of the Populett. The liquid tank shall be emptied in the autumn. Its filling level shall be observed to prevent it from cracking due to freezing.

The Biolan Populett shall be emptied when it fills up. The unit shall be emptied completely. The emptying shall be carried out either by shovelling, by turning the body of the toilet upside down, or by tipping it over using the tail lift of a waste truck. The Populett toilet is fitted with a bracket for the waste bin lift of the truck.

We recommend that a toilet used only in the summer be emptied in the spring, before using for the first time. The emptying process is most convenient and easiest at this stage.

Empty the seep liquid canister as required, however, at least once a year. Seep liquid, rich in nutrients, can be utilized as a source of nitrogen for compost. In particular, this improves the composting process of garden compost that is rich in carbon but poor in nutrients. Seep liquid can also be used as fertilizer for ornamental plants in the yard and garden. A safe dilution ratio is 1:5. Undiluted seep liquid can also be used, but the area must then be carefully watered after the application to avoid early blight. Fertilizing in the autumn is not recommended so as not to disturb the preparation of perennial plants for winter. The recommended storing time before use as fertilizer is approximately one year.

The thermal seat of the Populett can be cleaned using any common domestic cleaning agents. The liquid pipe and the liquid trough under the intermediate bottom shall be checked once a year and cleaned as necessary. There is no need to wash the toilet tank in connection with emptying it.

When locating the Biolan Populett, it is essential to provide sufficient space for use and maintenance of the toilet, for installation of the toilet through the wall of the toilet building, and for routing of the ventilation pipe. How the seep liquid or the seep liquid and urine shall be conducted into the tank or relevant treatment facility also needs to be taken into account. The unit can be placed directly onto ground of sufficient firmness. Before building the toilet, it is a good idea to plan the access route required for maintenance behind the toilet and for the post-composting procedure.

Placing in the toilet space

It pays to make a smooth and durable bed for the toilet, such as for example a gravel bed, covered by film-faced plywood or a concreted bottom structure. While creating the openings and bottom structure of the building, it also pays to occasionally put the toilet in place so as to find out where the openings still need to be reworked. Using the sawing template and the dimensions provided as an aid, a suitable opening for the toilet is sawed in the floor and in the wall. Depending on the manufacturing technique, the size and shape of the tank may vary slightly. This means you may have to enlarge the hole a bit or the seam of the floor and the tank will not be completely tight. Avoid, however, making the openings too large, because a too-wide chink between the toilet building and the toilet unit is not a good thing.

An easy-to-remove wooden strip or a rubber cover that gives way as the toilet is removed from the building can be installed to cover the space between the rear wall of the toilet building and the toilet unit.

Populett 200: Press the ventilation pipe cap onto the end of the pipe to ensure that neither rainwater nor flies can enter the toilet. To improve the ventilation and the evaporation of moisture, use the Biolan Wind Ventilator, available as an option.

The structure of the Biolan Populett’s front edge enables partial separation of the urine. For separation the transparent separating flap at the front edge is shifted to form a funnel leading to the separating pipe. During winter use, the separation reduces build-up of mass susceptible to freezing. As urine is directly conducted away, it will not be absorbed by the bulking material and freeze. Although the Biolan Populett is set to separate urine, seep liquid will also come out of the unit. It is conducted out of the unit together with the urine. If the Populett is set to separate urine, more liquid will be created for collection and treatment. This needs to be taken into account when dimensioning the treatment system. In a toilet that separates urine, the mass remains dryer, which makes emptying the toilet easier.

It is possible to operate the Populett in a mode in which it only separates seep liquid. The separating flap at the front edge is left in front of the separating pipe so that it directs the urine into the toilet waste. The excess fluid that is not absorbed by the bulking material or the toilet mass is separated by means of the intermediate structure of the bottom. Thus less liquid but more mass will be created in the toilet, especially in winter, compared with working in urine-separating mode.

If it is difficult to bury the collecting tank in the ground, it can be replaced with an evaporating pan. To reduce the liquid volume, the Populett is set to work in the mode in which it separates seep liquid. Place a rain lid above the evaporating pan – non-fertilized peat is recommended for the neutralisation of odours.