The Biolan Head Office is an ode to nature

We are proud to present our head office, a true masterpiece of ecological building.

Several ecological and experimental solutions and a range of natural materials are used in Biolan’s new office building, a eulogy to wood, stone and nature as a whole. Many of the ideas were put forward by Pekka Kariniemi:

”Why should valuable trees up to 300 years old become sheets of plywood 1 mm thick when entire trees can be used as structural and interior design elements? Properly handled, wood is really long-lived. What’s more, it’s beautiful. That’s why there’s no point in hiding it within the structure. On the contrary, it should be made visible.”

Technical data
Material quantities
Solutions for energy and the environment

Design and implementation of the office building is by a Finnish company (Oy TimberHeart Ltd/Marko Vuorinen). The structural frame is column-and-beam (TimberFrame). Solid timber columns act as the load bearing structure, and the beams are partially visible inside and outside the building.Heat insulation levels that meet the latest requirements are achieved in the spacious interior by using the TimberFrame structural solution. The structural frame is sturdy and retains its shape.

Biolan’s office building is the largest wood-framed post-and-beam structure in Finland. This technology is used in a 1,800 m2 shopping centre (owned by Tessa and Marcus Grönholm) in Inkoo and in the 600 m2 eight-unit low-rise apartment block in Levi, Finland.

Heat for use in the building is recovered from eight boreholes drilled into the underlying rock, each of them 200 m in depth. Temperatures at this depth vary from 39-43º F (4-6º C). Bedrock heat is a safe, reliable, long-lived and environmentally friendly way of supplying heat. The larger the structure to be heated, the more economical it is to use bedrock heat.This system is also used to heat the building’s circulating water supply and serves to cool the interior in summer.

The energy output of the building’s bedrock heat system is 120 kWh. Consumption will be above average during the first three years because excess energy is used to dehumidify the structure. Later, the consumption of energy should level out.

The droplet curtain of the Novarbo system in the foyer on the first floor can be used for cooling down the room space. The Novarbo system is an innovation developed by Biolan Oy for greenhouses, and is now being applied to office areas.Both air temperature and humidity can be controlled in greenhouses, and CO2 levels increased economically in an ecologically harmless way using this system.

The Novarbo system won the European Environmental Award for companies at the national level in 2009. Next it will participate in the all-European contest, which will be decided in June, 2010. Earlier, it was awarded the Satakunta INNOSUOMI 08 Innovation Prize. It is patented in more than 20 countries.

An unusual feature of the 2,000 m2 building is the reed roof, which breathes naturally and reduces heat loss from the building. It is recognised as being more durable than other more commonly used roofing materials.

This roof is the largest reed roof by surface area in the Nordic countries. Reeds are particularly suitable as a material given that Biolan, also a manufacturer of small-scale purification plants, utilises the nutrient-rich rainwater run-off. Construction professionals from Estonia skilled in applying both marine grasses and reed used in roofing were brought in for the project.

Reeds are employed in the interior as well, notably for large-scale decorative panels at cornice level. Reeds enliven the stone walls and lessen their impact.

Biolan has designed the recirculation water toilets in the building as well as the purification system for the toilets. The ecological footprint of the office is reduced by preventing black wastewater from being created and by utilising the nutrients of the toilet waste locally. The water is routed to the purifier in the basement of the office building. After purification, the solid waste is deposited and the water is recirculated.

Pictures of the head office 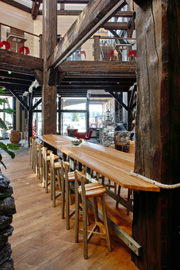 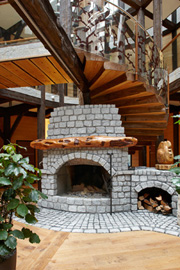 Pekka dragged home an unusual piece of wood discovered in a forest about 5 years ago. He soaked the wood in Pyhäjärvi Lake for a month, stripped it, then debarked it and dried it out. What the wood will be used for eventually is anyone’s guess.

Bedrock heat (same as geothermal heat except that heat is recovered through holes drilled more deeply into the bedrock, as with this building) The Earth offers an inexpensive heat source and temperature changes little throughout the year. Bedrock heat is suitable for all buildings. Pipe work takes up very little space, and can be installed on small land parcels. Minimal landscaping is needed after drilling into bedrock. This type of heating makes little impact on the surrounding environment.
If the heating wells are correctly drilled, the level and quality of the groundwater are unaffected, as the bedrock heating system is entirely self-contained.

Living wall
The Green Fortune living wall, developed by a Swedish enterprise, includes a computer that takes care of spraying and fertilisation. Water hoses run between the pervious backing cloth and the wall. The hoses are perforated, allowing the plants to be watered. Spraying and fertilisation methods can be adjusted for each wall. As a rule, plants are watered four times a day for about 3 minutes. They are fed with nutrients every three weeks on average.

The backing cloth has separate plant pouches for individual plants. Pouches may contain not only soil but also pebbles, so that the soil remains aerated. Generally, plants absorb all the water. The wall has a gutter and run-off pipe to guard against excess water. Daylight, on which the plants depend, is provided by powerful spotlights. Plants require 12 hours daylight and a corresponding period of darkness.

The living wall is not only a joy to the eye, it also has the distinct advantage of purifying the air. Plants sequester carbon neutral CO2 and dust.

Living walls also require maintenance, including pruning. As a rule, this is done by someone contracted by the enterprise that supplies the wall. Because Biolan has expertise in the gardening sector, it has its own permit to maintain the wall.

Decorative paintings
The Florentine townscape, the Norwegian fjord landscape, the 12 m high “kana” board, and the two “kana” script representations of the Biolan logo in the managing director’s office are by Miia Herranen, an artist employed by Maalausliike Heino, Rauma. 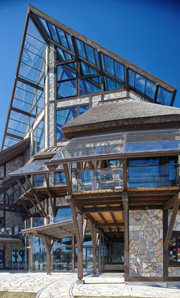 Glass
in balustrade and awning over balcony is of tempered, laminated glass.
The roof is equipped with 3K insulated glazing, three separate layers of glass and aluminium glazing bars.

The outermost sheet of glass is 6 mm tempered, self-cleaning Activ glass. The surface of the glass is treated with a high-quality titanium dioxide finish.

Activ glass only needs natural light and rainwater in order to remain clean. Natural light triggers a process by which any organic dirt, such as pollen, resin, bird droppings and leaves decompose on the surface of the glass.

During a shower or when dampened, an aqueous layer forms on the glazed surface, rinsing off any dissolved dirt. Following rain, the water evaporates without depositing streaks of lime. The Activ K-glass and balustrade glass are part of the Pilkington line of products. Jaakko-Tuote Oy carried out the post-processing, tempering, laminating and insulating processes. 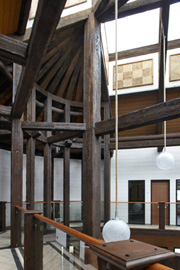 Post-and-beam construction technology
Construction technology that has been used around the world for at least 2,000 years. The frame of the building is assembled from solid wood columns and beams. Timber joints are manufactured in the factory and the columns are connected to the beams on site by traditional oak dowels or the dovetailed joint technique. The result is a very sturdy framing solution not subject to settlement that is suitable for large-scale open spaces.

TimberHeart installation The Biolan building frame was erected smoothly in less than two months and ahead of schedule, despite many new and innovative joint connections. Installation by TimberHeart took half a year as, besides the structural frame, the parts installed included insulation, external wall projections, roof substructure, windows and doors. Particular attention was paid to occupational safety because of the building’s height.

Timber imported from Austria, supplied by the developer’s representative (ESC Teollisuus/Erkki Granlund), was finished on site according to designs agreed with TimberHeart

TimberFrame structure is self-supporting. The frame is of Finnish pine. The building’s shape arose from the desire of Biolan’s managing director Pekka Kariniemi that the architecture should be not just another “glass cube”. Such a building should be spacious and open and equally feel like a home that the staff enjoys. It should raise the company’s image. Using this as a starting point, TimberHeart produced draft plans and adjusted them so that they met the client’s wishes. A certain symmetry and articulation of spaces is concealed in the unusual form of the building. Despite the challenging shape, feedback from TimberHeart indicates that, thanks to unique planning and production methods, it was possible to construct the frame with great accuracy. The idea was that all wood materials and connectors in the frame should be visually distinct and part of the load bearing structure.

Certification: The purpose of forest certification is to give reliable information to the consumer and the end user about the timber products, and especially about the source forest, and how it is maintained 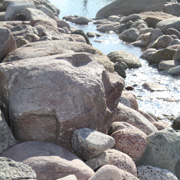 The building’s outdoor areas and structures are integrally part of the whole, which lays the emphasis on natural materials. The outdoor structures rely on the excellent quality of the Finnish stone, timber, plants and sources of water used.