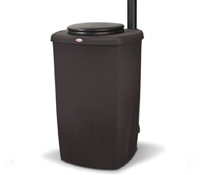 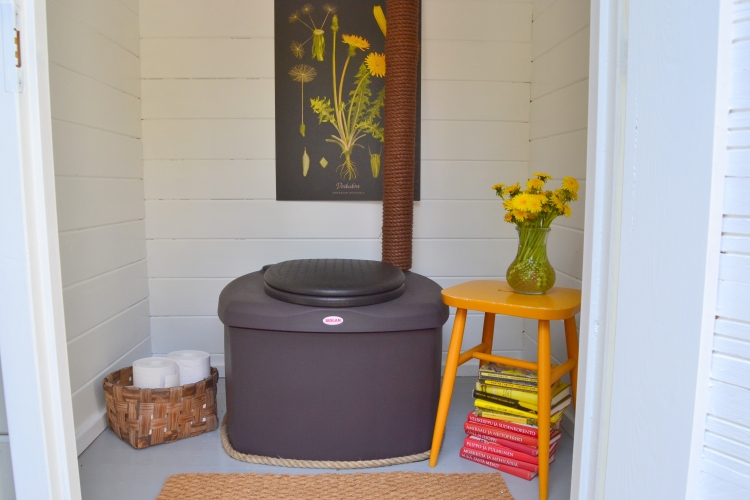 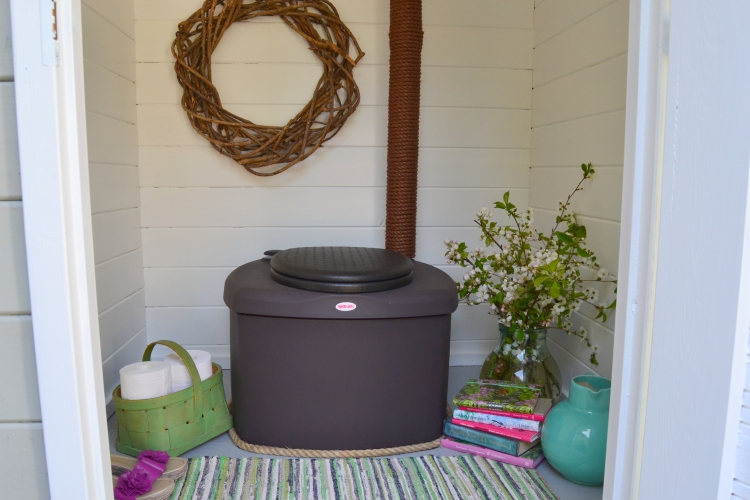 Biolan Composting Toileteco is hygienic and environmentally friendly. Effective thermal insulation and the channel supplying air to the centre of the compost mass help to ensure a quick composting process. No water or power supply is needed. Composting Toileteco is also suited for composting kitchen biowaste. Emptying is easy through the hatch at the lower part of the unit. You can use the
compost as cover soil or for fertilising decorative plants in your garden. 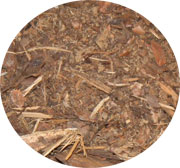 Before putting the Composting Toilet Biolaneco to use

Make sure that the air channel inside the compost tank is still in place after transportation. The channel must rest on the sill on the inside wall of the tank so that the inlet air valve above the emptying door will allow unobstructed airflow into the air channel. The air inlet valve cannot be adjusted.

Put a layer approximately 5 cm thick (about 20 l) of Biolan Compost and Toilet Bulking Material on the bottom of the Biolan Composting Toileteco to prevent the liquid separator plate from getting blocked.

Operation of the Composting Toilet Biolaneco

The patented ventilation system of the Composting Toilet Biolaneco ensures the composting is efficient and the toilet space remains odourless. Major part of the liquids evaporates during composting. The liquid separator on the bottom of the compost tank separates the excess liquid at the load peaks and collects it in a canister.

Because no chemicals or additives are required, the Composting Toilet Biolaneco benefits from a low operating cost. The bark-based Biolan Compost and Toilet Bulking Material is suitable for bedding.

The composting process starts as soon as there is a sufficient amount of waste in the composter, i.e. normally the unit is half-full of waste. The composting process is understood to start when the temperature of the mass inside the toilet rises above the outside air temperature. The temperature is raised and maintained by the vital functions of the micro-organisms that are created in the composter provided that waste is added regularly. After start-up, the waste reaches the cover soil stage in 6-7 weeks.

The amount of seep liquid created is greatest at the start, but is reduced as a result of warming up of the compost mass and evaporation.

Adjusting the replacement air valve in the seat top

Air channel in the toilet tank

Adjusting the inlet air valve above the emptying door

The inlet air valve above the emptying door cannot be adjusted. Its purpose is to bring air into the air channel. 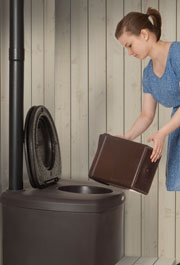 What can be placed in the Composting Toileteco

The Biolan Composting Toilet Biolaneco is intended for composting toilet waste as well as household bio-waste.Kitchen waste intensifies the composting process by balancing and diversifying the nutrition base of the compost. On the other hand, there are risks involved in composting kitchen waste. Pieces of meat and fish, especially when left in the open may attract flies into the compost tank. Cover the waste with bulking material with care.

Do not put into the toilet anything that hampers the composting process or does not compost, such as:

You can put into the toilet paper towelettes intended for cleaning hands or for intimate hygiene.

After every time the toilet is used, apply approximately 0.2-0.5 litres of Biolan Compost and Toilet Bulking Material over the left matter. Note that bulking material must also be applied after urinating. Applying suitable bulking material is essential for proper operation of the toilet.

Do not use activator in the toilet. It is not necessary, as the nitrogen content of the toilet waste is sufficient even without addition of the activator.

Year-round use of the Composting Toilet Biolaneco

In a toilet located in a non-heated space, the mass will cool down and may even freeze in severe frost or if the use is occasional. Freezing damages neither the unit nor the compost mass itself and the composting process continues when the temperature rises.

To reduce leakage of the seep liquid, we recommend using a double dosage of Biolan Compost and Toilet Bulking Material in the winter.

Empty the seep liquid canister in the autumn to prevent it from cracking due to freezing. Empty the toilet unit approximately to half-full in the autumn to provide space for the mass that will accumulate in the winter. If the toilet is to be used daily also during the cold season, locate the unit
in a heated space. 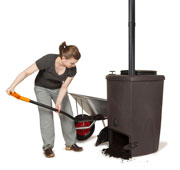 Only empty from the Composting Toilet Biolaneco compost that has reached the cover soil stage, and leave the raw waste still in the tank. To enable an efficient uninterrupted composting process, we recommend that no more than half of the mass be discharged from the unit at a time. Toilet waste matures to cover soil stage in 5–8 weeks, after which it can be discharged. Do not empty the tank until it has become full for the first time. There is no need to wash the toilet tank internally when emptying it.

Toilet waste can be so tough that it does not drop down onto the bottom of the toilet unit by itself after the emptying. If this is the case, push the mass down using a stick or the Compostmixer. This is easiest to begin from the corners. Be careful not to break the air channel in the centre of the toilet unit.

If the toilet is to be used only in summer, empty it in spring before using it for the first time. The emptying process is most convenient and easiest at this stage. If the compost mass is still frozen during emptying, thaw it by pouring a bucket of hot water through the seat ring opening a few hours before emptying.

Keep an eye on the filling pace of the seep liquid canister, in particular at the initial stage of use, until the emptying interval settles down. Empty the seep liquid canister as required, however, at least once a year. You can utilise the seep liquid, that is rich in nutrients, as a source of nitrogen for compost. This intensifies the activity of the garden compost in particular, which is poor in nutrients but rich in carbon. This way, you do not have to dilute the seep liquid.
You can also use seep liquid as fertiliser for ornamental plants in the yard and garden. A safe dilution ratio is 1:5. Undiluted seep liquid can also be used, but then you must water the area carefully after the application to avoid early blight. Fertilising in the autumn is not recommended so as not to disturb the preparation of perennial plants for winter. The recommended storing time for the seep liquid before use as fertiliser is approximately one year.

While building and selecting location for the Composting Toilet Biolaneco, it is essential to provide sufficient space for use and maintenance of the toilet, to route the ventilation pipe without any bends through the roof over the ridge and to locate the seep liquid canister in a suitable place. See the dimension drawing for the toilet unit in Product support.

Place the toilet unit directly on sufficiently firm ground or concrete surface. Do not place the tank on a boarded floor, because of possible seepage from the lower door.

To be observed if used in winter

If you plan to use the toilet continuously in winter, install the unit in a warm space and also make sure that the drain hose and the seep liquid canister do not freeze. If installing the toilet in a warm space indoors, insulate the ventilation pipe of the toilet where it runs through cold spaces, for example, in the intermediate roof space, to prevent condensation of water. The toilet can be used occasionally in winter (= weekend use) even if the unit is located in a cold space. 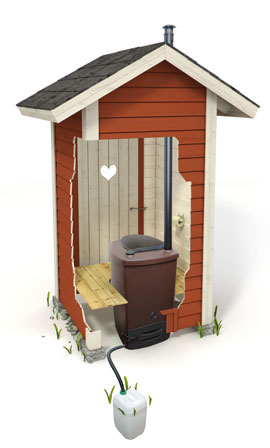 Locating the Composting Toilet Biolaneco in the toilet space

Install the Composting Toilet Biolaneco through the floor so that the top of the compost tank acts as the seat. The height of the unit is 97 cm and normally the seat height is 45–50 cm. Leave about half of the unit under the floor of the building to achieve a comfortable seat height. Optionally, you can place an appropriate elevation in front of the seat. If you want, you can encapsulate the seat part out of sight. In this case, also provide a hole in the wooden top for the replacement air valve.

Using for example a keyhole saw or a jig saw, cut a suitable hole for the toilet unit out of the floor using the sawing template as a guide. Depending on the manufacturing technique, the size and shape of the tank vary slightly. This means you may have to enlarge the hole a bit or the seam of the floor and the tank will not be completely tight. You can make the seam neat, for example, by fixing a thick hemp rope at the seam.

Direction of the emptying door

If installing the toilet in a warm space indoors, insulate the ventilation pipe of the toilet where it runs through cold spaces, for example, in the intermediate roof space, to prevent condensation of water.

If you have to make some bends, take note that the curvature of such bends must not exceed 33 degrees. You can boost the ventilation and evaporation of moisture by means of the optional Biolan Wind Fan. In complicated installations or when installing the Composting Toileteco in a residential location, it is recommended to use the Biolan Exhaust Ventilator, which is installed in the ventilation pipe. As required, you can even retro-fit the ventilator. Where necessary, the ventilation pipe can be extended using the ordinary grey sewage pipes and fittings (diameter 75 mm). You can purchase ventilation pipes also as spare parts from the Biolan web shop at or ask your dealer to order these for you.

Leading off the seep liquid

The liquid separator plate at the bottom of the Composting Toilet Biolaneco enables separation of excess liquid, the seep liquid, from the compost mass. This plate is removable, so you can take it away for cleaning, as required. Place the plate into the recess in the bottom of the Composting Toilet Biolaneco. Connect the seep liquid pipe to the drain hole in one side of the toilet unit. Route the pipe into a canister. Bury the canister in the ground, or place it some other way so that the seep liquid flows by gravitation into the canister. Keep in mind possible use of the toilet in winter when laying the seep liquid pipe and locating and insulating the canister. Where necessary, the ventilation pipe can be extended using sewage pipes and fittings (75 mm in diameter). You can purchase liquid pipe also as a spare part from the Biolan web shop or ask your dealer to order this for you. Always use sleeves with a sealing ring for joining up the pipes.

Route the hose into a canister that you have placed in such a way that the liquid will flow by gravity alone. If you want, you can build for the canister an externally insulated pit with cover of film-faced plywood. If the seep liquid canister is difficult to bury, you can replace it with a smaller canister or an evaporating pan. Place a rain lid above the evaporating pan – non-fertilized peat is recommended for the neutralisation of odours. If you want, you can lay the canister on its side.

The amount of seep liquid from the Composting Toilet Biolaneco is small, depending on the use, about 0.2 to 0.5 litres/user/per day. The seep liquid, however, is extremely rich in nutrients and must not be allowed to enter soil without being treated first.

Liquids rich in nutrients must not be allowed to enter the soil as they cause an excessively concentrated nutrient load.